Why I love playing at the Global Game Jam

The Global Game Jam is held every January, usually at the last weekend of the month. A Game Jam is basically a Hackathon1 where you have roughly 48 hours to make a game. To make things interesting, your game should align with a theme that will be revealed once the event start. There are no prizes to be won except the glory of making a game under a deadline.

At the game jam, you can join as an individual or as a team. Preferably, you make a new team at the event itself. This will help you make new friends that will last you well after the event is completed. You will also expand your own circle of influence. I've known many people who got work and recognition because of the 48hour camaraderie.

You don't need to make a video game. You can also make a tabletop game. There is no limitation on what medium you want to use.

Bring Your Own Computer Materials

The global game jam location will provide you with, at least, tables, chairs, electric power supply, common room to sleep, and snacks. All the others such as a shower room are extra and depends entirely on the jam site.

Notice what is not provided? Your materials for making your game. You should bring your own computer. I've seen jammers bring their desktops and monitors. I've seen some bring a printer to make their tabletop game. There was a year where a lot of people brought their Virtual Reality headsets.

That printer you might decide to bring - it can be used to make a poster for your game! Although, it is more common to write on a large piece of paper. But hey, we only have 48hours. Unless you finish early and have a team member who have the time to design the poster, the last hours are usually tense.

One final piece of advice: bring a jacket and sleeping materials.

Personally, I've brought the following at my game jams:

You need to sleep. There is no glory or honor in working without any rest.

I've seen a lot of times where people figured out the solution to their problems after resting. So don't worry about losing work time for sleeping.

I cannot speak for other game jams, but during the first game jam, I gave instructions to the crew to pay attention to participants. If they seem to be getting sleepy, they should be forced to take a nap, even if its just a few minutes. I was more worried about people getting sick at the time.

But in practice, people sleep because they feel sleepy. 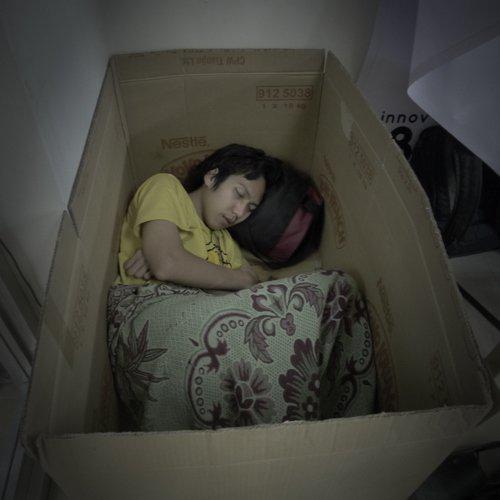 This is me during Global Game Jam 2011. The story was that I was so damn tired, so I start heading for the sleeping area. I saw a box near the entrance and my brain said, "whatever, sleep there. now". I found out later that the box was where the food came in; so yeah.

The next morning, people apparently took pictures and posted on social media.

Games I made in the game jam

Note: I'm still writing the posts for my old game jams. This list will be linked to them as they are made. That said, if you want to see my future posts, perhaps you'll want to follow my rss feed? :) 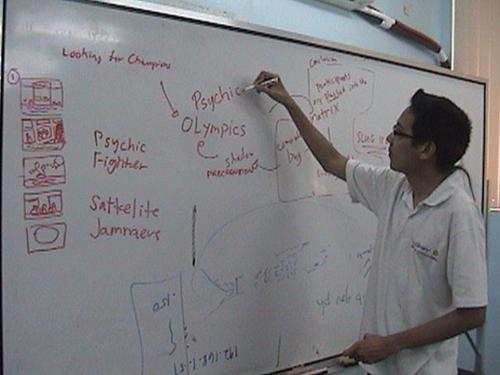 In 2010, I needed a whole whiteboard for my design notes. Now, I just need notebooks.

It may not be obvious at first glance, but I have a personal challenge going on.

What does the game jam mean for me?

I've been programming for a long time. But because I am self-learned, I always had this feeling that I need to learn more before I actually start making my own game. That mindset completely changed after my first game jam.

With the game jam, I forced myself to use everything I've learned to make a game. This is where I had an epiphany: Studying forever is fine, but you need to put what you've studied to the test. Its a feedback loop where you apply what you've learned.

Since then, I've looked at the game jam as a personal test of my skills. Every year, I see myself grow, but its at the game jam where I will be able to evaluate the power difference between old me and new me.

Not shown: all the training he did that led to this power boost

Apparently, if there's a deadline, I become more focused. With the game jam, I find that getting into the zone becomes a multiplier for productivity. 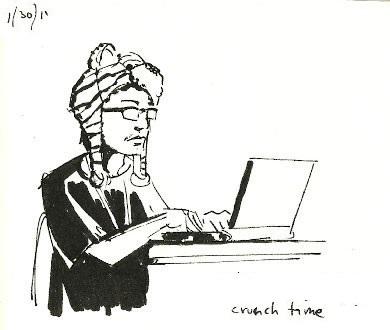 My artist friend, Ryan, drew me while I was in crunch mode during 2011. Its one of my favorite things from the game jams.

I've turned the global game jam into my personal self-evaluation test. But I've immediately see the flaw on this. Over time, I will become use to making a game in under 48 hours, effectively removing the challenge.

So I decided to make it harder for myself.

If you look at the list of games I've made, there is a pattern. 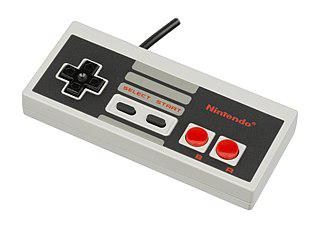 Originally, I wanted to have my personal challenge of making more games per jam. But when 8 came in, I realize that I can force myself to code in something outside my comfort zone: write in assembly! So I did.

I came in not knowing if I can actually do this. But with my core foundation in programming and game development, I was able to make a simple game.

On the fifth game jam, I made a 16-bit game for the SNES. This is a failure. Challenges should have a chance of failure. Otherwise, it is not a challenge.

The fifth game jam was the most frustrating for me because I only realized that I'll break the memory limits of assembly when the event was almost over. I had made the wrong assumption based on my experience with the NES and it was too late to change the game design AND code the memory mapper. It was a costly mistake.

I felt like a fraud on my fifth game jam

For the sixth game jam, I made a 16-bit game for the SNES... but this time, written in C. Writing in C made this game jam easier when compared to the previous year's assembly. But my challenge here was that I was not available for Saturday, giving me around 24 hours to jam (I had an event that weekend. But as soon as I finished, I immediately worked on my game). 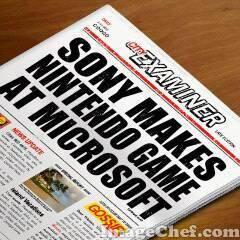 On the bright side, the sixth game jam showed how far my skill have gone since the first game jam.

The next game jam

As of the time of writing, GGJ 2018 is this weekend. I'm totally excited for this.

And since I now have a place to write, I'm going to have to write about my experience after GGJ 2018.

[1]: before Hackathons became mainstream; yes, I'm a hipster
[2]: technically, it is just one game with 4 minigames. But I consider this as a pass.