I didn't play Street Fighter EX when it first came out. I grew up in the province and have limited arcade selections. It doesn't help that I rather play Xmen vs Street Fighter, Marvel Super Heroes, or Metal Slug (going for the 1CC) whenever I'm at our local arcade.

After moving to Metro Manila, I hang out with friends to play Fighting Games at our weekly casuals. A new game was released: EX Fighting Layer, and we got to play it on day 1. I immediately told everyone that I have no experience with the series and all I know was that you can chain supers like in Xmen vs Street Fighter for the original PlayStation.

So my friends taught me the basics of EX Fighting Layer

The nice thing about fighting games is that you can play other games in the genre and use fundamentals that you've learned from your favorite fighter to skip the beginner phase. The fundamentals refer to your characters spacing, when to press buttons, how to do special moves, and yomi (I'll be talking about this in the future. For now, check out this post for a premier).

Different fighters have different emphasis on fundamentals and different approaches to combat. Smash Bros, for example, rewards those with good spacing and use of special moves; and Street Fighter 5 rewards aggression and those who can predict when their opponent will press their button.

After a short play with EX Layer, I realize that the fundamentals is on opening up your opponent's defense to get that first hit, so you can chain all the attacks. The gougi system (their system to differentiate itself from other games) is designed so that you'll get more options in breaking defense if you activated them.

My playstyle turns out to be hit-and-run, with emphasis on whiff punishments. Also, I've been told that I play like it was Samurai Showdown (another game I didn't grew up with).

Playing EX Layer reminds me so much of old fighting games.

Modern fighting games are very polished, which makes sense given the context of e-sports: focus on graphical and being spectator-friendly first, wacky gameplay second.

People who don't play your game will judge it based on what they see. They might think that the game is not good, if they see things that doesn't make sense visually or there are mechanics that you can't see unless it was pointed out by a commentator (for example, plinking in Street Fighter 4).

(Street Fighter 5 have beautiful animation but, depending on who you ask, the gameplay can be too simple)

Wacky gameplay is risky because it'll depend on the players if they would accept it or think that it's too wild for them to win games. In e-sports, if things are not balanced, you will hear complains from the players.

But Marvel vs Capcom 2 and 3 have wacky gameplay that was accepted by the players - each character in the game have their own gimmick that is broken and by themselves can dominate any other fighting game characters. Because these overpowered characters are in a marvel game, they are balanced, in a strange way. The meta soon developed around the idea that you need to use your gimmick to get the first hit and dominate the other player.

(How could you be broken if everyone else is broken?)

Because of e-sports, for better or for the worse, money will be on the line. Professional players, if they want to win, will have to switch from their favorite character to an objectively better character. You can see this with Daigo Umehara, a player who loves Ryu as he have said multiple times in interviews, switched to a different character. He said that he would love to continue playing with Ryu, but he have to win.

Or with Itabashi Zangief, a player with Zangief in their player name because of his love for the character, switching to someone else so that he'll get a chance to win.

I'm not saying that new fighting games are bad. I'm saying is that they have different design philosophy from old games.

Street Fighter EX is an old game and the gameplay was transferred to Fighting EX Layer. Its a breath of fresh air to play something graphically unpolished but was designed to be fun.

Look at this example, Darun the grappler have a special move that only have one frame of animation and he stays that way until the move is over. Or that his super move is him doing a bridge pose and pushing his opponent hundreds of feet into the air. 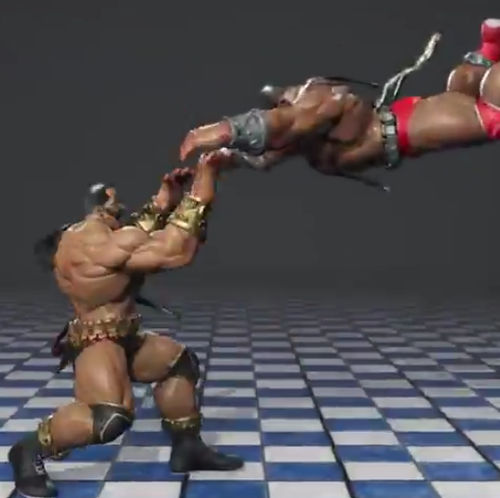 The inputs also have a tighter buffer window, so its common to see missed special commands or super.

One thing I like is an emphasis on the dashing carrying momentum. Many of the modern games have you dashing and then stopping as soon as you press a button. Having momentum makes it rewarding to combo from a dash, and I don't have to adjust which normals I should use because I'll be guaranteed to be closer than if I had walked.

During our weekly casuals, we do small low-stake tournaments.

If you think of casuals as practice and learning time, think of tournaments as your tests of what you've learned. If you want to level up, you have to play in tournaments.

I got 2nd place on our first EX tournament.

My first match was against Mael, someone who plays all the fighting games. I was still deciding on what gougi to use. Mael have decided that armor gougi is top tier, so he used that during all of his games (iirc). I went 6 chain gougi because I thought that a longer combo will be a good source of damage since I still don't have the links and super cancels down. Turns out that that was a bad idea since not all normals connect properly.

Mael loves to do "super frame traps" so as the evening continues, we stop punishing most of the whiffed supers.

I lost this match and had to fight from the loser's bracket (honestly, since there's only a small number of us, its not a big deal).

On the next match, I was paired with Jekro using Allen, a shoto clone. Not knowing much about EX, I played this like I'm fighting Ryu; so predict the fireball zoning and be careful of shoryukens. I don't want to be eliminated, so I played a little bit more aggressive than my last match.

I hate how much trouble I have with the cross-ups in this game. From my point of view, it looks as if it'll cross-up, and I'll block wrong. 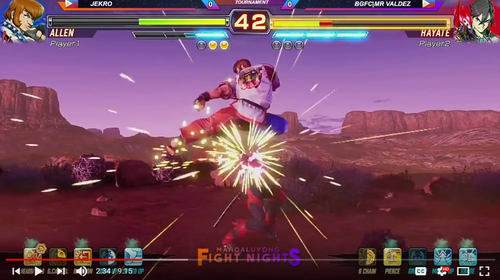 On the next match, I fought Mark A, one of the more composed and defensive player I regular fight. He used Garuda and I had to fight around his sword ender which seems to be very safe.

This is the match where I figured out that the gougi that fit my playstyle are Hunting and Utsusemi. They allow me to do dash hops (King of Fighters!) and invisible during wakeups, respectively.

Its barely audible in the video, but someone yelled "Rare footage of Mark A actually angry". The funny thing (to me), was that he WAS angry when he heard me muttered to myself "ang daya, di lumabas (what a cheat, it didn't come out)", after I missed my input during the invisibility time. He overheard.

The last match was with Mael and he tested my character knowledge (which he 100% know that I don't have) by using someone no one used in the entire evening. I got caught in his anti-air grab and it made me play way more defensively than I should have. It was also late in the match when I realize that Hayate's s.mk is a good poke.

I'm almost happy with my placing in the tournament (I was aiming for first, so I am salty losing). I would love to play more EX even though my main game right now is Dragonball FighterZ. And I expect to go down in ranking as the game's meta is developed.

But as long as I have fun, it'll be a great game to be play on the side.